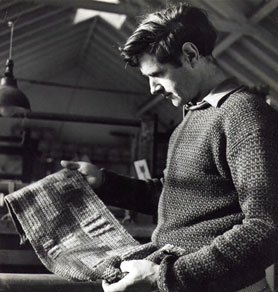 An innovative master weaver, author and teacher with a global reputation

Peter Collingwood, who has died aged 86, was the pre-eminent British artist weaver of the past 50 years. His technical and aesthetic innovations have been appreciated around the world, most notably in his Macrogauze wall-hangings, in which his traditional skill and visual abstraction work in perfect harmony. A master craftsman and the author of several works on weaving, his work as a teacher and his generous spirit had a profound and lasting impact on generations of students.

He was born in Marylebone, London. His mother was a classics scholar, and his father the professor of physiology at St Mary’s hospital medical school. His father died when Peter was 12 and, having attended a preparatory school for the sons of doctors, he was educated at Epsom college, Surrey, and St Mary’s hospital. However, he soon realised that he was not cut out to be a doctor and bowed to family advice to complete his training.

National service in the Royal Army Medical Corps and a stint with the Red Cross in Jordan followed, but Collingwood had already found his vocation: weaving. He had even made his own loom out of two deckchairs and produced scarves for officers’ wives on it. He had also discovered a lifelong passion for textile structures from around the world after receiving a gift of a Bedouin tent-hanging, which remained a treasured possession.

On his return to Britain, he spent six months at Ditchling, East Sussex, in the workshop of Ethel Mairet, then the best-known weaver in Britain. He thought that she had accepted him as a pupil because she was intrigued that a man wanted to weave, even though she once called him “the dullest man I have ever met”.

He then worked for two other prominent weavers, Barbara Sawyer and Alastair Morton (the latter went on to become the artistic director of Edinburgh Weavers). Both gave him freedom to try out ideas, and he began a lifetime of experimentation. In 1952 he set up a workshop in Archway, north London. There he built his own equipment and wove rugs that he later peddled on his bicycle to shops such as Liberty and Heal’s, where he sold them for £4 or £5. He also exhibited with organisations such as the Red Rose Guild and the Arts and Crafts Exhibition Society, and wrote articles for the Journal of the Association of Guilds of Weavers, Spinners and Dyers. He worked one day a week at art schools – Hammersmith, Camberwell and Central – “They paid you well. I could almost live on that one day’s wage,” he remarked.

In 1957 the educationist Henry Morris had established the Digswell Arts Trust in Hertfordshire, and the following year he invited Collingwood to become one of the first fellows, with a workshop and flat of his own. There he met the potter Hans Coper, with whom he was to have a joint exhibition at the Victoria and Albert Museum in 1969. It was at this time that he also met his future wife, the teacher Elizabeth Brunston.

Collingwood benefited from Morris’s contacts with architects and planners and received commissions for large works from Shell and BP. For his rugs, he began to experiment with a practice he called shaft switching, for which he adapted the loom to enable him to weave quickly designs that would normally use a slow tapestry method. Another innovation was weaving the weft at an angle; this he named anglefells.

By 1962, the year of his marriage, his reputation was such that he was invited to run a workshop in the US, something that became a regular occurrence. Thanks to a loan from a well-wisher, he was able to buy an old school at Nayland, near Colchester in Essex, in 1964, which he converted into a home and studio, where he worked until his death. By this time he was developing his Macrogauze wall hangings, using a technique that permits warps to cross each other and even move sideways. Collingwood eventually extended these into 3D structures, culminating in his vast 2m by 4.5m hanging for the Performing Arts Centre, Kiryu, Japan, in 1997, woven with a new Japanese stainless steel yarn and weighing 100kg. The next year he was celebrated as a master weaver in an exhibition at Colchester that then toured the world.

Collingwood wrote five highly influential books of which the first, Techniques of Rug Weaving (1968), is probably the best known. His personal favourite – and the one that gives the most insight into his inquiring mind – is The Maker’s Hand (1988), in which he analyses, with diagrams and photo-graphs, 100 woven structures from around the world.

One of the few to earn a living as a full-time weaver, his innovations were not only aesthetically pleasing, but his efficient production methods were essential to his economic success. He was awarded the OBE in 1974.

He is survived by Elizabeth, his son, Jason, also a weaver, and his daughter, Rachel.

This website uses cookies to improve your experience while you navigate through the website. Out of these cookies, the cookies that are categorized as necessary are stored on your browser as they are essential for the working of basic functionalities of the website. We also use third-party cookies that help us analyze and understand how you use this website. These cookies will be stored in your browser only with your consent. You also have the option to opt-out of these cookies. But opting out of some of these cookies may have an effect on your browsing experience.
Necessary Always Enabled
Necessary cookies are absolutely essential for the website to function properly. This category only includes cookies that ensures basic functionalities and security features of the website. These cookies do not store any personal information.
Non-necessary
Any cookies that may not be particularly necessary for the website to function and is used specifically to collect user personal data via analytics, ads, other embedded contents are termed as non-necessary cookies. It is mandatory to procure user consent prior to running these cookies on your website.
SAVE & ACCEPT

You have Successfully Subscribed!